José first told me about The Power of Habit and it caught my interest.

My review of The Power of Habit

I found the book educative and entertaining. It’s full of great stories that the author, Charles Duhigg, uses to make his points. He also prescribes how one can change a bad habit.

Habits, according to him, are formed by a cycle. A cue triggers behavior (good or bad), then a reward, and then a craving develops to drive a loop of repetitive behavior.

The “Power of Habit” is one of the best non-fiction books I’ve read in long time. It gives you a whole new and life-changing perspective.

A young woman walks into a laboratory. Over the past two years, she has transformed almost every aspect of her life. She has quit smoking, run a marathon, and been promoted at work. The patterns inside her brain, neurologists discover, have fundamentally changed.

Marketers at Procter & Gamble study videos of people making their beds. They are desperately trying to figure out how to sell a new product called Febreze, on track to be one of the biggest flops in company history. Suddenly, one of them detects a nearly imperceptible pattern—and with a slight shift in advertising, Febreze goes on to earn a billion dollars a year.

An untested CEO takes over one of the largest companies in America. His first order of business is attacking a single pattern among his employees—how they approach worker safety—and soon the firm, Alcoa, becomes the top performer in the Dow Jones.

What do all these people have in common? They achieved success by focusing on the patterns that shape every aspect of our lives.

They succeeded by transforming habits.

In The Power of Habit, award-winning New York Times business reporter Charles Duhigg takes us to the thrilling edge of scientific discoveries that explain why habits exist and how they can be changed. With penetrating intelligence and an ability to distill vast amounts of information into engrossing narratives, Duhigg brings to life a whole new understanding of human nature and its potential for transformation.

Along the way we learn why some people and companies struggle to change, despite years of trying, while others seem to remake themselves overnight. We visit laboratories where neuroscientists explore how habits work and where, exactly, they reside in our brains. We discover how the right habits were crucial to the success of Olympic swimmer Michael Phelps, Starbucks CEO Howard Schultz, and civil-rights hero Martin Luther King, Jr. We go inside Procter & Gamble, Target superstores, Rick Warren’s Saddleback Church, NFL locker rooms, and the nation’s largest hospitals and see how implementing so-called keystone habits can earn billions and mean the difference between failure and success, life and death.

“As people strengthened their willpower muscles in one part of their lives—in the gym, or a money management program—that strength spilled over into what they ate or how hard they worked. Once willpower became stronger, it touched everything.”

― Charles Duhigg, The Power Of Habit: Why We Do What We Do In Life And Business

Habits aren’t destiny. As Charles Duhigg shows, by harnessing this new science, we can transform our businesses, our communities, and our lives.

Incidentally, I ‘read’ the book on Blinkist. Give it a try. 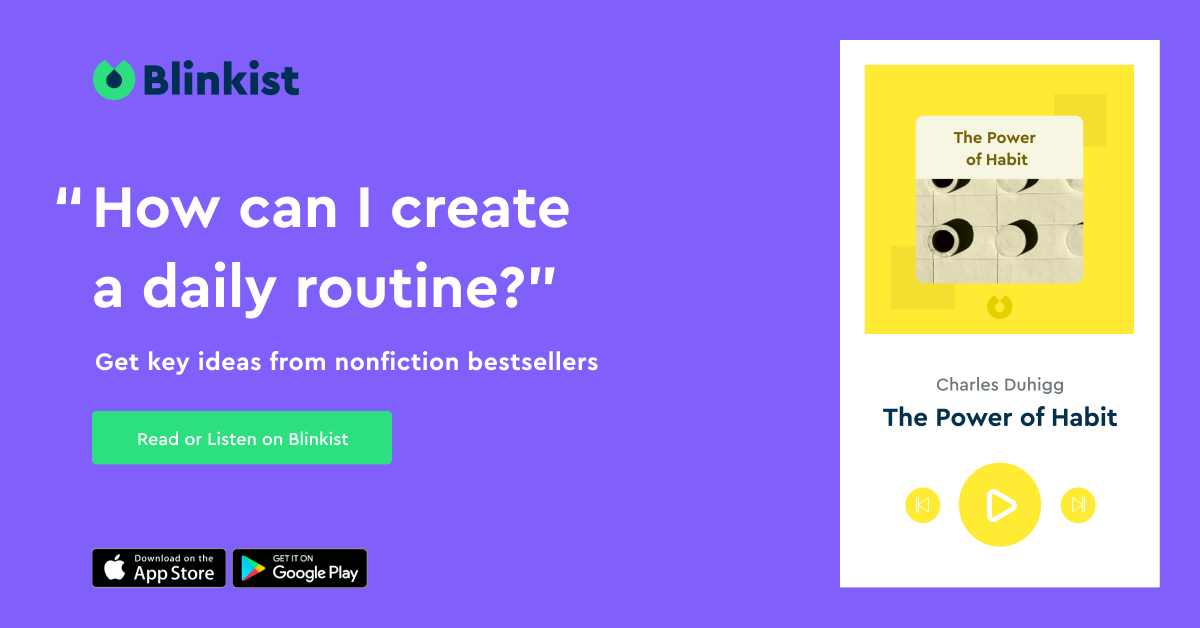 If you have a story you’d like to share anonymously on Everyday Gyaan, do contact me. You can be assured that I will keep your name and details confidential.

There are links on this site that can be defined as “affiliate links”. This means that I may receive a small commission (at no cost to you) if you subscribe or purchase something through the links provided.

I believe in the greatness of God, in the goodness of the Universe, in the inherent kindness of people! I believe that good will triumph over evil. That Truth will reign.....
We sometimes spend too much time and energy on things and situations that drain us. Trying to be nice to people who don't treat us like we're enough - yet we spend so much of ourselves trying to be there for them.
We don’t always get a chance to start from scratch in life, as much as we’d like to be able to do that. If that was possible, I’d probably be less gullible, more open to adventure and clearer about what I wanted to make of my life.
Tweet
Pin
Clip
Telegram
WhatsApp
%d bloggers like this: